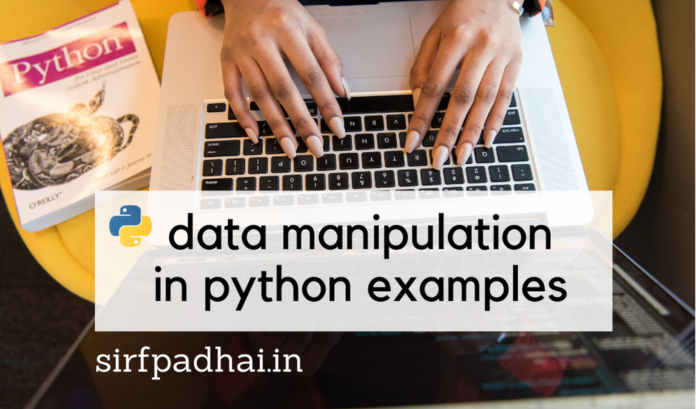 Most applications involve some form of data manipulation, whether it’s simply adding a few numbers together or extracting the individual fields from a log file and creating a report. In either case, you need to manipulate information from one form or value into another.

Data manipulation in Python relies on a combination of built-in operators and external modules that provide additional functionality. For example, the math module provides trigonometric functions so you can calculate the length of the side of a triangle given just the angle and the lengths of the opposite sides.

For manipulating text there are a number of solutions available, including the built-in operators and string functions. For more advanced operations you can use regular expressions to match elements with a remarkable degree of control.

This chapter looks at both aspects of data manipulation and explains how to handle special data types, including binary structures and Python’s Unicode system.

Most numeric operations can be performed using the range of built-in operators that work directly with number objects. All of the basic math operations such as addition, subtraction, raising numbers to the power of another value, and so on, are supported natively by the Python operators.

For other mathematical and trigonometric functions you need the math or emath (for complex numbers) modules. The random and whrandom modules provide different methods for generating random numbers. All of these modules are discussed in this section.

The math module provides the basic mathematical and trigonometric functions. Note that all the trigonometric operations function in radians, not degrees. You can convert degrees into radians by using the formula d*((2pi)/360), where d is the value in degrees. To convert the value back to degrees, use the formula r*(260/(2*pi)).

The math module provides two constants, pi, the ratio of the circumference of a circle to its diameter, and e, the natural logarithm.

Table 10-1 lists the functions supported by the math module. The ceil() and floor() functions should be explained further. Both return a whole number, represented as float type, which either the integer component of the supplied expression or the next whole number. This is a similar principle to rounding up or down, except that ceil() always rounds up to the nearest whole number and

floor() always rounds down to the nearest whole number. You can see the results of ceil() and floor() when using the functions interactively:

Calculating a random number can be useful in many areas of programming. Introducing a random element is a great way to add a unique or impossible-to-guess value to an ID or reference number and can also be used in applications such as games where you need an unexpected or unpredictable result.

True random number production is difficult, if not impossible, for a computer purely because computers are designed to work with precise and predictable numbers Humans are, of course, much better at producing random numbers, but you can’t always have a handy human to generate your random numbers!

If you don’t supply any values or the three arguments have the same value, the current time is used as a seed value. The seed() function is automatically called if you haven’t already called the function the first time you use one of the other three functions. The random() function returns a random number in the range 0,0 to 1.0:

The randint() function accepts two arguments that indicate the range of the integer number to be generated. For example, to produce a random number between 1 and 256 (inclusive):

Finally, the choice( ) function randomly selects one of the elements from the supplied sequence. Consider the following example:

Note that the item isn’t removed from the sequence; it is only selected and returned. The random module exports functions to generate random numbers using different distributions on real numbers. All of the functions are likely to produce numbers with à random deviation better than the base randint() and random() functions from the whrandom module, but with a slightly performance overhead. Table 10-3 lists the functions exported by the random module.