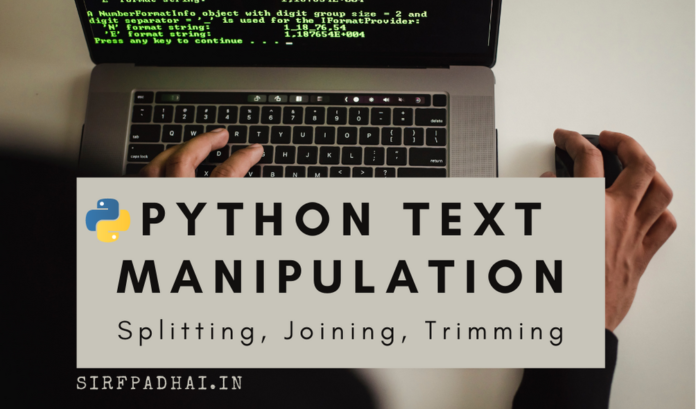 Strings in Python are objects, and because of Python’s strong operator support, simple tasks like concatenating two strings together can be done easily using the + operator. Strings are also sequences, and that means that you can address a single character or a sequence of characters (a slice) without resorting to an additional function to extract the characters you want.

But what about other operations, like changing the case of a string or splitting a text record where fields are delimited by a single character into separate fields?

Here’s an example: Let’s say you want to replace a portion of text in a Python string with another portion of text, for example, replacing the word “cat” with “dog” in the expression “the cat on the mat”. Although you can find the location of the word using the index() method, you cannot replace it. Strings are immutable you cannot replace the characters in the sequence directly even if the replacement characters are the same length as the character you’re replacing. You could do it by finding the location of the word, slicing out everything up to the word and everything after the word, and then reassembling the string.

For most of the basic string manipulations, you can rely on either the built-in functionality offered by the string object type, or you can use the string module. For regular expressions, you use the re module. This section discusses both of these modules.

Throughout this section it’s important to remember that you must capture the return values from all of these functions-Python does not change or modify a string except when you are using a method on a specific string object.

To find the location of a particular string within another string, use the index0 function. For example, to find the string “cat” in the string “the cat sat on the mat” use

The loc variable should now contain the value 4, since the word you are looking for appears at the fifth character in the string (remember that string indices start at 0).

The index function also accepts a third argument-the index within the string where the search should start. For example, if you are looking for “at”, but aren’t interested in the one in “cat”, you could use

In Python, the string object does not support assignment, so the following command still does not work:

A TypeError exception will be raised if you try this. Instead, the most straightforward solution is to use slices to extract the text before and after the portion of text that you want to replace and then use concatenation to reassemble the string, as follows:

Alternatively, if you can be sure that the string you are searching can be found without skipping over elements, you can use the string module’s replace() function:

This example replaces old with new in the string text either as many times as seen. or max times if the argument is supplied. You can therefore rewrite the preceding example as:

You can also use the replace() method directly on the string:

Note however that searches always start from the beginning of the string. Replacing “at” once changes “cat”: you can’t start the search from anyplace other than the start If you want to replace a word that appears at the end of a string, either use a regular expression or use slices to make the change only in the component of the original string that you want to modify. For example,

changes the text variable to read “the cat sat on the moon”.

The Python split() function comes as part of the string module and allows you to split a string by a single or multi-character sequence. For example, you might want to split a list of fields separated by commas into a list of separate fields. The function splits a string into component parts, returning a list. The general format of the split() function is

The text argument is the string that you want to split and expr is the separator. If you do not supply expr, Python assumes you want to split by whitespace. For example, you can convert a sentence of text into a list of individual words as follows:

If the max argument is supplied, it operates in the same way as the Perl version, limiting the number of times that the split operation occurs. If you want to perform a regular expression-based split, use the split() function that comes with the re module:

The preceding statement splits the characters in text whenever it sees one or more whitespaces, commas, colons, or semi-colons. See the section “Regular Expressions” later in this chapter.

Although you concatenate two strings together in Python using the + operator.. the process can be quite tedious if you have a number of strings that you want to join together using the same character or sequence. For example, imagine that you want to reassemble the sentence you split earlier. Because you don’t know the length of the list of words, you’d ordinarily need to use a loop:

Using this technique, you end up with a useless space on the end of the string. The solution is to use the join() function in the string module. The join function joins together all the elements in a list using the same separator, but it only places the separator between the elements that it’s concatenating, as in the following example:

For example, to change a word to lowercase, use

Although there are times when all you want to do is change the case of a string, there are also times when you want to translate individual characters. For example, imagine you have a string “ffffff” when you need the string “aaaaaa”. You could do the translation manually, but there is an easier way-use the translate function in the string module.

For example, you can change all lowercase characters to uppercase using

Let’s consider a different example, translating lowercase characters to their opposite number, i.e., “a” to “z” and “2” to “a”:

Using the preceding example, the result of translating “the cat sat on the mat” is “gsv xzg hzg Im gsv nzg”!

In addition to the functions you’ve already seen, the string module also defines some constant string sequences that can be used with many of the functions described in this section. Table 10-5 lists the constants that you can use within functions like maketrans() to refer to specific groups of characters.