Home Java Language What are the main features of java programming language? 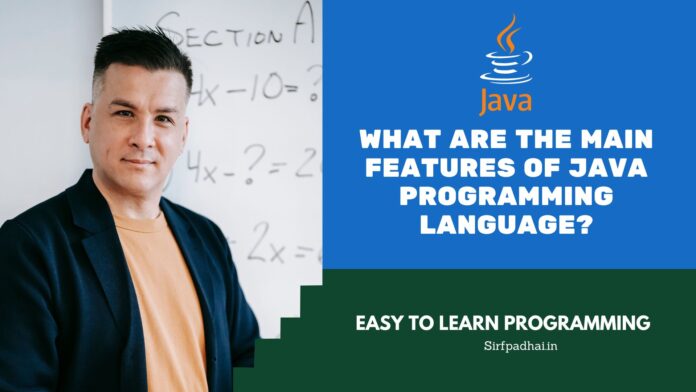 Java has the following features:-

Java is a pure object-oriented programming language, that is, procedures are not used in it, but it is a language based only on objects.

Java is platform independent language that means it can run in any platform. This feature does not suit any other language as much as it does Java.

Java is platform independent language because in Java the source code is compiled into intermediate code which we call byte code and every system that has JVM interprets the byte code.

The third big feature of Java is that it is a secure language. Java is the most secure because Java programs run in the java runtime environment. Java uses public key encryption and Java applications are accessed in a secure encrypted form on the Internet.

In Java the source code is compiled into byte code and then it is interpreted by JVM into machine code.

Java is an easy language because it has syntax similar to c++ which can be learned easily. Operator overloading and header files are not used in Java, which makes it even easier.

Garbage collection is done automatically in Java, it has very good memory allocation. Whatever errors come in Java can be solved easily. For all these reasons, Java is a robust language.

Java is a distributed language which means that Java programs are designed to run in the Internet and HTTP and FTP protocols are used in Java so that they can be easily accessed in the Internet.

Multi threading is used in Java i.e. in Java the program is divided into smaller sub programs and these sub programs are executed sequentially.