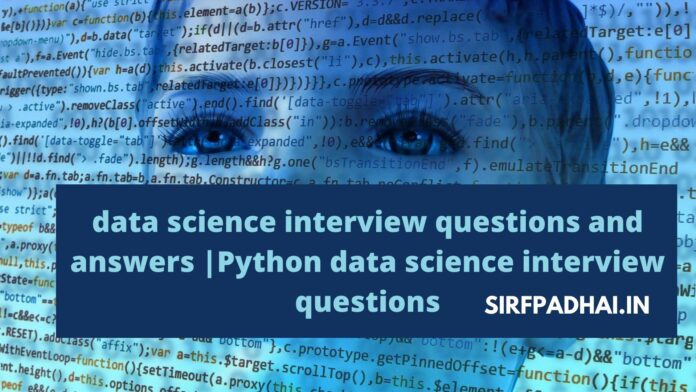 1. Between python and R which one would you pick for text analytics and why?

Ans. For text analytics, python will gain an upper hand over R due to following reasons:

The pandas library in python offers easy to use data structures. python has faster performance for all types of text analytics. R is best-fit for machine learning than mere text analysis.

3.What do you understand by linear & logistic regression?

4.What do you know about Autoencoders?

5.Explain the concept of boltzmann machine?

6.What are the skills required as a data scientist that could help in using python for Data Analysis Purposes?

Ans. The skills required as a data scientist that could help in using python for data analysis are:

7.What is full form of GAN? Explain GAN.

Ans. The full form of GAN is Generative Adversarial Network. Its task is to take inputs from the noise vector and send it forward to the generator and then to Descriminator to identify and differentiate unique and take inputs.

8.what are the vital component of GAN?

Ans. There are two vital Component of GAN:

1.Generator: The generator act as a forger, which creates fake copies.

2.descriminator: The Descriminator act as a recognizer for fake and unique copies.

9.What is the computation Graph?

Ans. Tensors are the mathematical objects that represent the collection of higher dimensians of data inputs in form of alphabets, humerals and fed as inputs to the neural network.

11.What is Batch Normalization in Data Science?

Ans. Batch normalization is Data Science is a technique through which attempts could be more to Improve. the performance and stability of the neural networks. This can be done by normalizing the inputs. In each layer so that the mean output activation. remains 0 with the standard deviation at 1.

12.What is dropout in Data Sciences?

Ans. Dropout is a toll in Data science, which is used for dropping out the hidden and visible units of network on a random basis. They prevent the Overfitting of the data by dropping as much as 20% of the nodes so that required space can be arranged for iterations needed to coverage network.

13.What are the different types of Deep learning frameworks?

14.What are the various machine libraries and their benefits?

Ans. The various machine learning libraries and their benefits are as follows:

15.What is the Full form of LSTM? What is function of LSTM?

Ans. LSTM is for Long Short Term Memory. It is a Recurrent neural network that is capable of learning long term dependencies and reaching information for the longer period as part of its default behavior.

16.What are the differences between supervised and unsupervised learning?

17.What are the feature selection methods used to select the right variables?

The best analogy for selecting features is “bad data in, bad answer out.” When we’re limiting or selecting the features, it’s all about cleaning up the data coming in.

Wrapper methods are very labor-intensive, and high-end computers are needed if a lot of data analysis is performed with the wrapper method.

18.For the given points, how will you calculate the Euclidean distance in Python?

The Euclidean distance can be calculated as follows:

Check out the Simplilearn’s video on “Data Science Interview Question” curated by industry experts to help you prepare for an interview.

19.What are dimensionality reduction and its benefits?

Ans. The Dimensionality reduction refers to the process of converting a data set with vast dimensions into data with fewer dimensions (fields) to convey similar information concisely.

This reduction helps in compressing data and reducing storage space. It also reduces computation time as fewer dimensions lead to less computing. It removes redundant features; for example, there’s no point in storing a value in two different units (meters and inches).

20.How should you maintain a deployed model?

Ans. The steps to maintain a deployed model are:

Constant monitoring of all models is needed to determine their performance accuracy. When you change something, you want to figure out how your changes are going to affect things. This needs to be monitored to ensure it’s doing what it’s supposed to do.

Evaluation metrics of the current model are calculated to determine if a new algorithm is needed.

The new models are compared to each other to determine which model performs the best.

The best performing model is re-built on the current state of data.

21.What are recommender systems?

Ans. A recommender system predicts what a user would rate a specific product based on their preferences. It can be split into two different areas:

As an example, Last.fm recommends tracks that other users with similar interests play often. This is also commonly seen on Amazon after making a purchase; customers may notice the following message accompanied by product recommendations: “Users who bought this also bought…”

As an example: Pandora uses the properties of a song to recommend music with similar properties. Here, we look at content, instead of looking at who else is listening to music.

22.After studying the behavior of a population, you have identified four specific individual types that are valuable to your study. You would like to find all users who are most similar to each individual type. Which algorithm is most appropriate for this study?

As we are looking for grouping people together specifically by four different similarities, it indicates the value of k. Therefore, K-means clustering (answer A) is the most appropriate algorithm for this study.

23.You have run the association rules algorithm on your dataset, and the two rules {banana, apple} => {grape} and {apple, orange} => {grape} have been found to be relevant. What else must be true?

The answer is A: {grape, apple} must be a frequent itemset

24. Why is R used in Data Visualization?

Ans. R is widely used in Data Visualizations for the following reasons-

25.What does NLP stand for?

Ans. NLP is short for Natural Language Processing. It deals with the study of how computers learn a massive amount of textual data through programming. A few popular examples of NLP are Stemming, Sentimental Analysis, Tokenization, removal of stop words, etc.