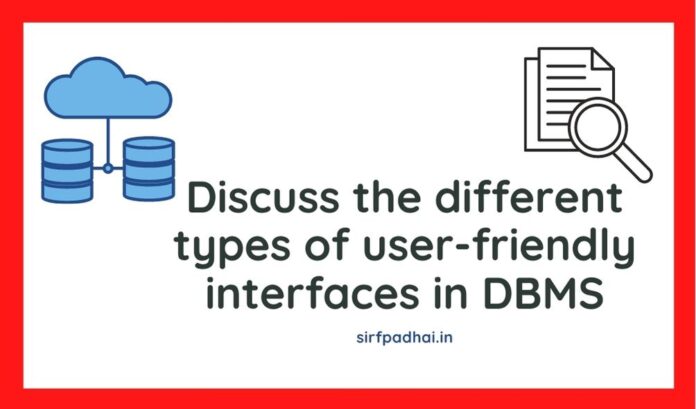 Ans. User-friendly interfaces provided by a DBMS may include the following-

(i) Menu-based Interfaces for Browsing –

These interfaces present the user with lists of options, called menus, that lead the user through the formulation of a request. Menus eliminate the need to memorize the specific commands and syntax of a query language. Rather, the query is composed step-by-step by picking actions from a menu that is displayed by the system. Pull-down menus are used in window-based user interfaces. They are often used in browsing interfaces, which allow a user to look through the contents of a database is an exploratory and unstructured manner.

A forms-based interface displays a form to each user. Users can fill out all or only certain form entries to insert new data, in which case the DBMS will retrieve matching data for the remaining entries. Forms are usually designed and programmed for naive users as interfaces to canned transactions.

A graphical user interface displays a schema to the user in diagrammatic form. The user can then specify a query by manipulating the diagram. In several cases, GUIs utilize both menus and forms. Most GUIs use a pointing device, such as a mouse, to pick certain parts of the displayed schema diagram.

Parametric users, such as bank tellers, have a small set of operations that they must perform repeatedly, System analysts and programmers design and implement a special interface for a known class of naive users. Usually, a small set of abbreviated commands is included to minimize the number of keystrokes required for each request. For instance, function keys in a terminal can be programmed to initiate the various commands. This allows the parametric user to proceed with a minimal number of keystrokes.

(vi) Interfaces for the DBA-

Many database systems contain privileged commands that can be used only by the DBA’s staff. These include commands for creating accounts, setting system parameters, granting account authorization, changing a schema, and reorganizing the storage structures of a database.