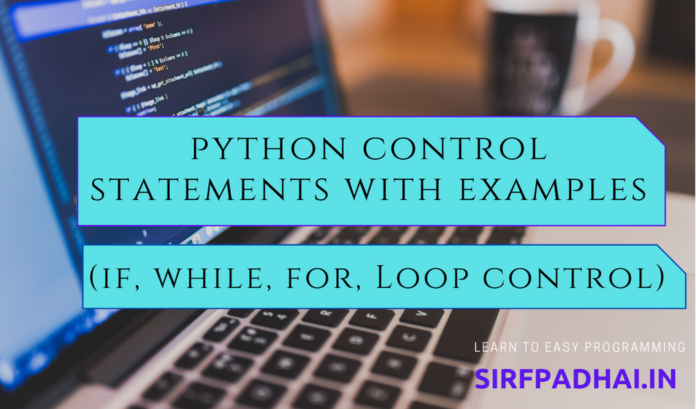 Note that in each case, the preceding line to the statement block ends with a colon. This indicates to Python that a new statement block should be expected. Unlike many other languages, Python is a little more relaxed about its definitions of the code block. Both C and Perl use curly brackets (or braces) to define the start and end of a block. Python uses indentation-any lines after the colon must be indented (to the same level) if you want them to be in the same logical code block.

You can see how the indentation and blocks work by looking at Figure 3-2. Notice in this figure that Block 1 continues after the indentations for Block 2 and Block 3 no longer exist. See the rest of the script for details on the block definitions and indentation.

Consider the following example combining if and elif statement:

For simple test, you can combine the statement and block onto a single line:

This really only work for single-line block.

Note:- If you want to perform a switch or case statement in python, you must use an if statement with multiple elif expressions.

The basic format is therefore:

For example, to work through the characters in a string, you might use

Note that in this particular example, it’s probably easier to use a for loop. The optional else block is only executed I’d the loop exits when EXPRESSION returns false, rather than the execution being broken by the break statement. See the example of a for loop in the next subsection.

You specify the object to be used as the iterator within the loop and then supply any form of sequence object to iterate through.

For each iteration of the loop, number is set to the next value within the array producing the output

Because it works with any Sequence, you can also work through strings as in

In addition, just like the while loop, the else statement block is executed when the loop exits normally as in

Because the for loop does not support the loop counter format offered by Perl and C, you need to use a different method to iterate through a numerical range. There are two possible methods. Either use the while loop:

Alternatively, you can use the range function to generate a list of values:

In its single-argument form, range returns a list consisting of each number up to, but not including, the number supplied:

If the range function is supplied two arguments, it returns a list of numbers starting at the first argument, up to but not including the last argument:

The final form, with three arguments, allows you to define the intervening step:

Python supports three loop control statements that modify the normal execution of a loop. They are break continue and pass. The break statement exits the current loop, ignoring any else statement, continuing execution after the last line in the loop’s statement block.

The continue statement immediately forces the loop to proceed to the next iteration, ignoring any remaining statements in the current block. The loop statement expression is reevaluated. The example

The pass statement is effectively a no-op-it does nothing. The statement

does nothing at all.

Although it may seem pointless, there are times when you want to be able to identify a specific event, but ignore it. This is especially true of exceptions, the Python error-handling system. You’ll see pass and exceptions in action in Chapter 5.

For the programmer migrating to Python, there are a number of common trap that trick the unwary. Most relate to the very minor differences between Python and other languages, particularly if you have been used to Perl or Shellscript.

Variables within Python follow these basic rules and differences from other languages:

•You do not need to predeclare variables before they are used; Python sets the object type based on the value it is assigned.

•Variables are given simple alphanumeric names.

•Some variables have embedded methods that operate on the object’s contents.

Blocks start after a colon on the preceding line. For example:

The block continues until a new block is created, or until the indentation for the block ends.

When indenting, use either tabs or spaces__ do not mix the two because this is likely to confuse the Python interpreter and people maintaining the code.

The most common error with a method call to an object is to assume that the call returns information. The statement

sorts the object list, but sets the value of sorted to the special None.