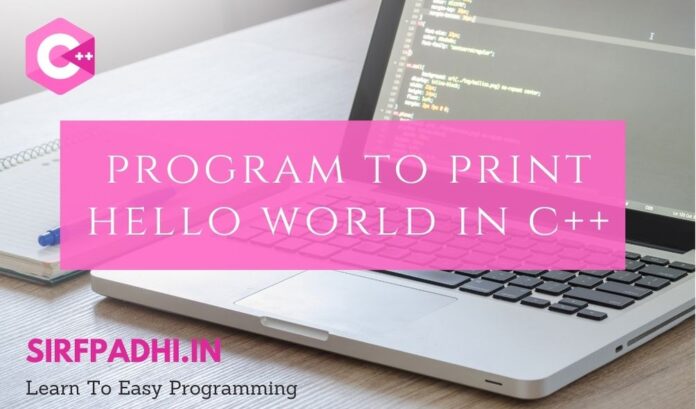 While writing programs in C or C++, first use Header Files (Preprocessor). This has to be written because there are some Library Functions in it. To write a program, it is necessary to write Library Functions.

In C++, before creating a program, we include some pre-defined library files in the header section of the program.

In these files, there are many pre-defined functions which contain the code for a task. To use these functions in a program, we have to include their file (in which they are defined) in the header of the program.

In a program, the syntax for including header files is given below –

It has h, file extension.

The cout statement is used to print a message or result on the monitor screen because this output operation is performed, hence it is also known as output statement in C++.

In this << is called insertion operator.

In this >> is called insertion operation.

The store value in a variable is called an output statement.

This is a simple program in which we print a message.

The program given below is based on Turbo C++ :–

<iostream.h> and <conio.h> are both header files.

void is a return type, in which main() is a function which is the execution point of a program. Because here is a void type function, so function main() returns any value.

getch() is a function that holds the output.

In C++, both the statements (cout, cin) are terminated by semicolon (;).

Both cout and cin are defined under iostream-class, so we include their header file (iostream.h) in the program.

To display the value of a variable in the program, double quotes are not used in the exit statement.