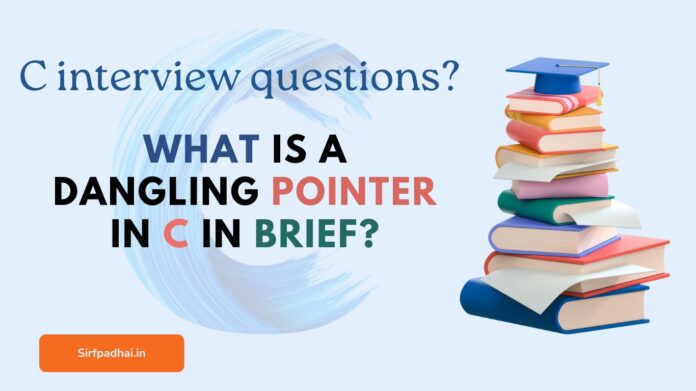 what is dangling pointer in c interview questions?

A dangling pointer in C is a pointer that references memory that is no longer valid, such as memory that has been freed or memory that was never allocated. It can lead to undefined behavior or memory corruption and should be avoided through careful memory management.

what is a dangling pointer in c in brief?

Dangling pointers can lead to a variety of problems, such as reading or writing to invalid memory, causing segmentation faults, or causing undefined behavior. In some cases, they can even be exploited by malicious actors to gain control of a program or system.

In C, one of the primary causes of dangling pointers is the use of wild pointers. Wild pointers are pointers that have not been initialized to any valid memory address or have been set to an address that has been freed. When a wild pointer is dereferenced, it can cause undefined behavior or a segmentation fault.

Another cause of dangling pointers in C is the use of stale pointers. A stale pointer is a pointer that has been assigned a valid memory address, but the memory it references has since been freed. For example, a stale pointer can occur when a dynamically allocated block of memory is freed, but a pointer to that memory still exists and is being used by the program.

To avoid the problem of dangling pointers, programmers should use care when allocating, freeing, and assigning memory addresses to pointers. The use of a smart pointer and unique_ptr can be useful. Additionally, they should be familiar with the lifetime of the memory they are using, and make sure that pointers are not used after the memory they reference has been freed or is no longer valid.

“Imagine you’re lost in a mall and you ask a passerby for directions to the nearest food court. But instead of telling you the way, they hand you a pointer. Can you explain how you would use this pointer to find the food court, and what precautions you would take to make sure you don’t end up in the parking lot instead? (Hint: think of the mall as memory, the food court as a valid memory location, and the parking lot as a dangling pointer).”

This question is testing the candidate’s understanding of how pointers work in C, as well as their ability to think critically about the potential issues that can arise when working with pointers. The interviewer is looking for answers that demonstrate the following:

It’s a good way to get a sense of how the candidate approaches problem-solving and whether they have a strong grasp of the nuances of working with pointers in C. And, a little bit of humor never hurt anyone!